Beyak should not be silenced about Indigenous issues 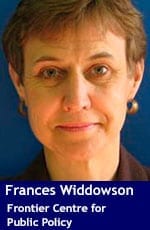 Sen. Lynn Beyak was recently removed from the Conservative caucus for saying and publicizing things that many people think are true. This has emboldened her opponents, and some Indigenous activists are now suggesting that Beyak be thrown out of the Senate and investigated for thought crimes.

A year ago, Beyak had the audacity to assert that residential schools had done “some good.” She then posted several supportive letters from Canadians that mostly echoed the sentiment that, while there were many problems with these institutions, they often provided necessary education, skills and connections to the modern world that would have been otherwise unavailable to Indigenous children.

More controversially, some of the letters pointed to the cultural problems that continue to exist in many remote Indigenous communities. A substantial segment of the people in these communities have not graduated from high school and many have difficulties participating in wage labour. This results because they are influenced by the remnants of hunting and gathering lifeways that have been retained because of government neglect and continuing isolation from productive processes. One letter also mentioned the problem of a rentier mentality, common in societies that rely on government transfers and royalties for their sustenance, which has shaped the consciousness of many Indigenous people. People may not like it but this claim seems to be true.

The problems faced by those who are dependent on transfers do not plague the Indigenous activists who are castigating Beyak. These activists tend to be educated and live comfortably in urban environments. Through employment and interaction with the general population, they have gained the confidence to frame how Indigenous issues are discussed. Non-indigenous people, on the other hand, are likely to defer to these activists since they’ve been told that being an ‘ally’ requires them to ‘get out of the way.’ Settler guilt about the atrocities committed by their colonizing ancestors facilitates this obeisance.

One of the unfortunate consequences of this non-Indigenous virtue-signalling is that any questioning of the claims of Indigenous activists results in the unscrupulous labelling of critics as ‘racists’ and ‘white supremacists.’

This demonization relies on a confusion of culture and race. The repetition of this confusion is evident in Conservative Senate Leader Larry Smith’s response to a questionable interpretation of the remarks of one of Beyak’s supporters: “To suggest that Indigenous Canadians are lazy compared to other Canadians, is simply racist.” With this dubious rendition, Smith fails to understand that one can point to a number of maladaptive tendencies in Indigenous communities without assuming that these problems are innate or due to the moral failings of individuals. The fact that many Indigenous people have become educated and productive shows that the current difficulties are not rooted in race.

These dynamics have made it almost impossible to discuss Indigenous-non-Indigenous relations openly. The fear of being called a racist means that it has been left up to Indigenous activists to control policy debates in their own interest. These activists use their credentials as an Indigenous person to propose unworkable solutions to the problems of the marginalized. Returning to the past is proposed as the answer to Indigenous anomie, when it is actually impediments to discarding retrograde traditions that make it difficult for those in remote communities to make a living or to even participate effectively in the world around them.

So why do Indigenous activists, who owe their functionality to modern education, employment and integration, recommend a return to the past for their marginalized brethren? This apparent contradiction can be understood when one considers the meaning of ‘Indigenous’ – the identity that is the source of the activists’ power. Being Indigenous is to have some authentic connection to the original occupancy of the land. By promoting the importance of otiose traditions and continued separation, activists are able to legitimize their role as mediators and use this as a basis for rent seeking.

Beyak has enabled all of us to take the first step in honestly discussing these circumstances. While one might disagree with some, or even most, of what is being said, it’s obvious that the education provided by the residential schools was beneficial.

The feverish rhetoric of Indigenous activists is intent on exacerbating grievances, making it more difficult to determine the truth and achieve genuine reconciliation. It’s also creating a negative attitude toward education among Indigenous youth, further entrenching their isolation and dependency. This will continue if a more comprehensive account of the residential schools is silenced.

Frances Widdowson is an associate professor in the Department of Economics, Justice, and Policy Studies at Mount Royal University. She is co-author (with Albert Howard) of Disrobing the Aboriginal Industry: The Deception Behind Indigenous Cultural Preservation.